eXXpedition is a series of all-female scientific voyagesaround the world, sailing to do research on and raise awareness about theimpact of ocean plastic pollution. With the issue of plastic pollution close toits heart, TOMRA joined the international sailing voyages as a top sponsor,beginning with eXXpedition’s 2018 journey through the North Pacific Gyre (alsoknown as the Great Pacific Garbage Patch) and the 2019-2021 eXXpedition RoundThe World journey.
30 Jun 2021

It was way back in 2014 when it all began, as Emily Penn sailed from Britain to Australia on a mission to highlight sustainable ways of travelling the world. To her surprise, she saw plastic debris floating by the boat in every ocean. And as they stopped over at small island states in remote corners of the planet, she discovered one important source of the problem. Due to demands from tourism, and from lack of land for farming food, those islands had developed a new reliance on importing packaged food and drink, which were wrapped in plastic. And because of lacking waste infrastructure, a lot of the plastics were dumped in make-shift landfills or on the beach, which is harmful to both people and the environment.

Using this experience to get as close to the problem as she could, Emily co-founded eXXpedition, a series of sailing voyages dedicated to ocean plastic research and raising awareness of the problem. Emily Penn explains, “There are over five trillion pieces of plastic floating on the surface of our ocean, and there are many times that, that have sunk to the depths that we can’t even measure.”

eXXpedition hosts all-female voyages, in part due to the unique impact of plastic and their toxics on the female body, and also to advance women in adventure and science. They build multi-disciplinary teams of women from all over the world to bear witness to the plastic problem, so they can tell the stories of what happens with plastic once it ends up in our oceans. Since its first voyage across the Atlantic Ocean in 2014, different teams of women have sailed with eXXpedition through the Amazon, South Atlantic Ocean, Caribbean, and around Britain – and eventually to the Great Pacific Garbage Patch. Between October 2019 and March 2020 eight teams of women sailed 10,330 miles from the UK to the South Pacific sailing across two of the world’s ocean gyres through the Azores, Antigua, Bonaire, Aruba, Panama, Galapagos, Rapa Nui and Tahiti. 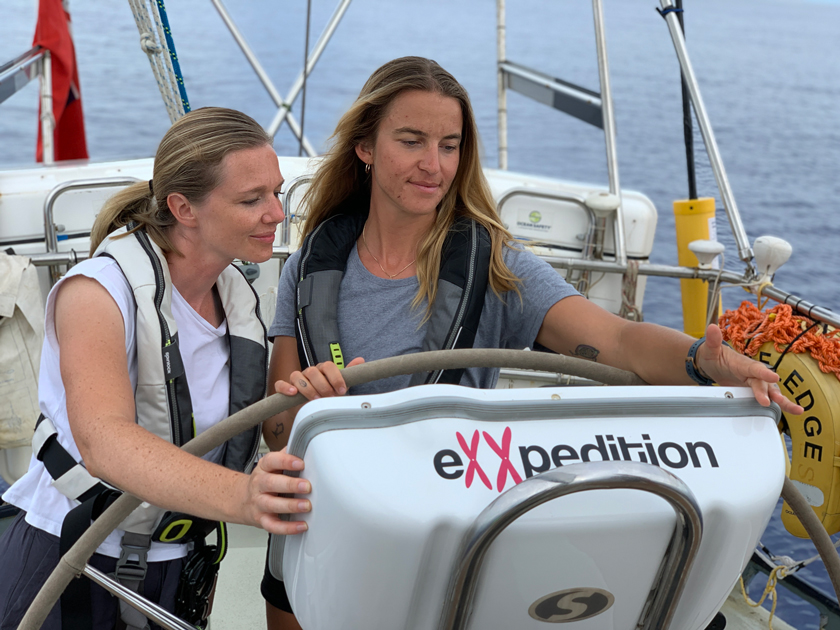 The 10th voyage of eXXpedition saw a nearly 3000-nautical mile, three-week crossing from Honolulu, Hawaii to Vancouver, Canada, with Emily Penn at the helm. After hearing about eXXpedition from a friend who had joined the original 2014 voyage, TOMRA circular economy advisor Kristine Berg applied to join the 2018 journey through the North Pacific Gyre. When she raised the idea with her manager, “they asked what I was going to do, and said, ‘that’s awesome, let’s be a part of it, let’s make it a bigger thing’. TOMRA actually became title sponsor for the entire eXXpedition North Pacific voyage,” Kristine explains.

Like earlier voyages, eXXpedition 2018 sought to gather data and increase awareness of the problem of plastic that goes astray and ultimately ends up in our oceans. This time they were sailing to one of the most remote places on the planet – through the infamous “Great Pacific Garbage Patch”. The largest of five gyres identified in oceans around the globe, the North Pacific gyre is the world’s largest and densest accumulation zone of floating ocean plastics.

The Great Pacific Garbage Patch is an accumulation zone spread out between 20 and 40 degrees north of the equator, and it is most dense in the middle. “The tilts and rotation of the planet, ocean and weather systems converge in swirls out at sea called gyres. Anything that floats will eventually get captured in these massive swirling movements, creating these garbage patches in our oceans,” Kristine explains. “It is so vast, and the plastic is broken up into small and often unrecognizable pieces, so it’s nearly impossible to clean it up.”

On board eXXpedition, Kristine brought to the team her knowledge of land-based solutions to "turn off the tap” of litter on land, such as collecting and recycling beverage containers. “The reason we felt at TOMRA it was important to partner with eXXpedition is to be part of the research they’re doing, seeing where are the pathways that plastic takes from land to sea – which is key in understanding how to prevent plastic from going astray in the first place,” Kristine describes.

“We’re really glad to be working with TOMRA, who play such an important role in providing one of the really important solutions to solving this problem. And we realize more and more the importance of standardization of plastic on land and working with governments on how you can give plastic a value to then be able to stay in the loop,” Emily Penn shares.

Photo: eXXpedition Round The World departs Plymouth in 2019

Following the success of the North Pacific crossing, TOMRA continued its collaboration with eXXpedition as gold sponsor and a member of the scientific advisory board (through TOMRA Senior Vice-President for Circular Economy Strategy, Dr Daniel Schwaab) for the “eXXpedition Round The World” 2019-2021 voyages. The voyages departed from Plymouth in the United Kingdom in October 2019, with a plan to transverse the Arctic and four of the globe’s five gyres where plastic accumulates. In early 2020, they reached Easter Island, before setting sail towards Tahiti. “Easter Island is an incredibly important stop on our world mission. The South Pacific Gyre is the least researched accumulation zone,” explains Emily Penn.

On board from Easter Island to Tahiti was a multi-disciplinary crew of 14 women, including TOMRA circular economy advisor Kristine Berg, and TOMRA Australia ambassador Laura Wells, who is also a marine biologist, model, and science communicator. “I am privileged to represent Australia in this global initiative that will see female participants from a range of disciplines support innovative scientific research,” states Laura.