From ocean plastic waste and waste management costs to mandated collection targets, more and more governments are making sustainable resource management a priority. One policy that is actively being discussed is the concept of giving waste a value, to incentivize the public to collect it for recycling. This is a particularly popular approach for the items that are most commonly littered and found in oceans, such as beverage containers. Container deposit return systems (or “bottle bills”) add a deposit on the container on top of the price for the beverage, which is repaid when the consumer returns it to be recycled. In the past three years alone, 22 states or countries have committed to update existing deposit systems or develop new systems. In this ongoing article series and its latest white paper TOMRA explores the best practices that separate the leaders in deposit return systems from the laggards. 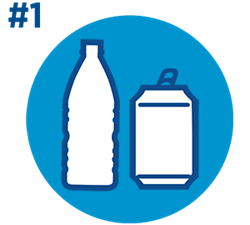 
Since containers available for a cash refund (“covered by a deposit”) are more likely to be returned for recycling than those without such a refund, high-performing deposit return systems include a broad scope of beverages and containers. A broad scope of beverages and containers in a deposit return system (DRS) can help prevent consumer confusion and create a fair playing field among producers. There are three aspects of a DRS’s scope to consider: beverage category, container material type and container size.

Container material type: Plastic, glass, and metal are commonly included in deposit systems. More and more, liquid paperboard is considered to be included as well. Legislators prioritize these materials given their popularity with producers and consumers, and their recyclability.

Container size: The common DRS size ranges include 100 ml up to 3 liters (or 4 ounces up to 101 ounces.). Size determinations are made based upon those most commonly consumed and the availability of technology for redeeming containers efficiently.

In all three scope considerations – beverage type, material type and container size – local market beverage consumption patterns should be considered when defining scope, to ensure the DRS achieves maximum litter reduction and maximum recycling performance, while ensuring a fair playing field that avoids market distortions. In addition, the more container types that are included, the greater the economies of scale achieved – which helps to lower the Extended Producer Responsibility costs of producers.1

A broad scope leads to higher performance, because containers with a refundable deposit are collected for recycling at 2-4 times the rate of containers without a deposit.2 To illustrate this, it can help to review the following formula:


For reference, below are several examples of DRSs covering well-defined and broad scopes of containers and beverages. These systems cover the scope of beverage and containers sold today, which is different than some deposit systems that have not expanded scope since forming in the 1970s and 80s. 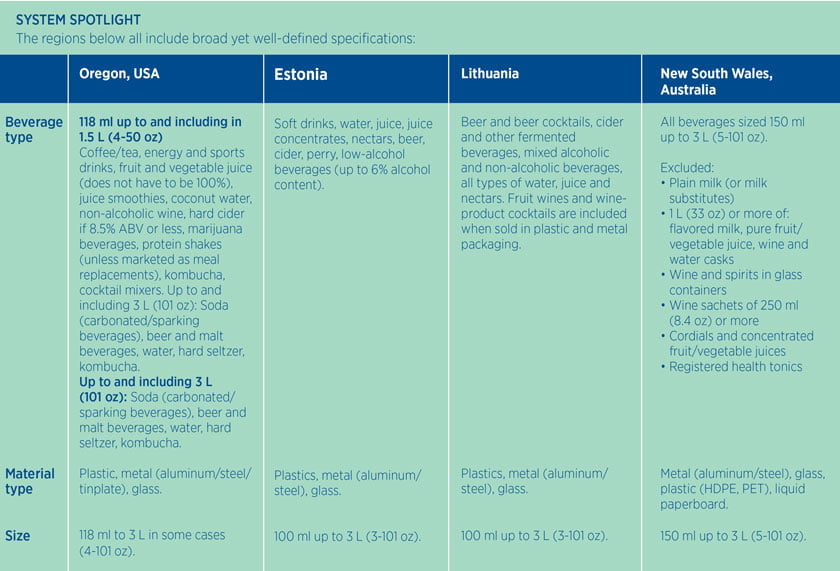 To provide a sense of what including or excluding one beverage category can mean for a deposit system’s performance, New York provides a helpful example. When New York expanded its DRS to include water alone in 2009, it doubled the amount of PET plastic containers captured by the system. Water containers now make up about 25% of all the containers that New Yorkers redeem for recycling.

A second example is the Netherlands. Since it was implemented in 2005, the Netherlands’ DRS only included PET plastic bottles over 1 liter. This limitation meant that all small plastic bottles, metal cans and glass bottles were excluded from the system. However, after research revealed that of the approximately 900 million small plastic bottles sold every year in the Netherlands, around 100 million are estimated to end up as litter in the environment, the Dutch government announced that plastic containers smaller than 1 L would carry a €0.15 ($US0.17) deposit as of July 2021. This is expected to collect 90% of large and small plastic deposit bottles.4 The Dutch government later announced an expansion to all beverage cans as well after the container category did not reach the government’s recycling rate target of 70% without a deposit.5

1 For more on EPR financing in deposit return systems, see pgs 42-46 in TOMRA white paper Rewarding Recycling: Learnings from High-Performing Deposit Return Systems.
2 In the US, the average collection rate for recycling is 22% for non-deposit containers and 66% for deposit containers on average according to Container Recycling Institute’s 2021 Beverage Market Data Analysis of 2018 data. In Europe the average collection rate for recycling of non-deposit PET beverage containers is 47% and 94% for deposit containers on average. This data is compiled from deposit System Operators and “PET Market in Europe: State of Play,” Eunomia. 2020. Data available upon request.
3 “State of Vermont House Committee on Ways and Means,” Container Recycling Institute (testimony). March 2021. Accessed via this link.
4 “Government to implement deposit-return scheme for smaller plastic bottles,” PlastEurope.com. May 2020.
5 Implementation date of December 31, 2022. “Dutch government introduces 15 cent deposit on cans by 2022,” IAmExpat. Feb 2021. Accessed via this link.